Latest News
Home /Cohen brings Trumps net worth statements to hearing. Heres how to read them

President Donald Trump’s financial statements are here — and they likely only tell part of the story of his wealth.

Michael Cohen, the president’s former personal attorney, testified before the House Oversight Committee on Wednesday, and provided the committee with a number of documents, among which he said were copies of Trump’s financial statements for 2011, 2012 and 2013.

They include details about the president’s net worth at the time — the sum of his total assets minus his liabilities.

Notable items on Trump’s balance sheets include a “brand value” of $4 billion in 2013 — the highest valued asset in that year’s statement — which bumped his total assets to $9.1 billion that year and raised his total net worth to $8.6 billion.

The line item for Trump’s “brand value” is absent from his 2011 and 2012 statements. In both of those years, the total value of his assets was about $5 billion. 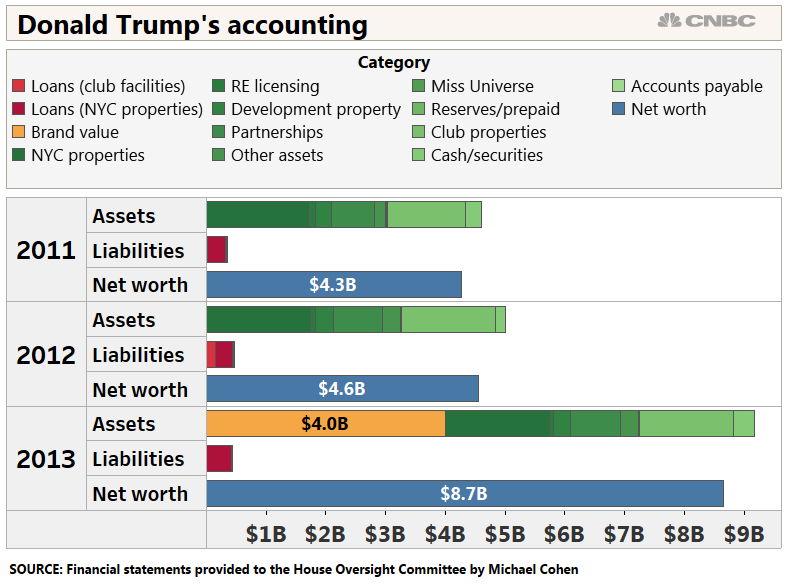 “My net worth fluctuates, and it goes up and down with markets and with attitudes and with feelings, even my own feelings,” Trump had said in a 2007 deposition.

Steven Groves, a spokesman for the White House, had no comment.

While net worth statements provide some insight into a person’s assets and outstanding debt, they don’t provide the whole picture.