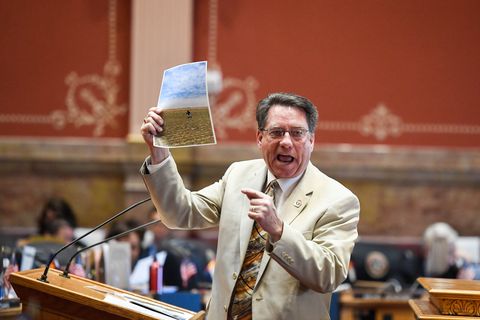 Being our semi-regular weekly survey of what’s goin’ down in the several states where, as we know, the real work of governmentin’ gets done, and where your mother sends back all your invitation.

There is no place to start our tour except Texas, where, if the rest of us are lucky, they’ve finished rubberizing the walls of the state legislature chambers. From CNN:

House Bill 896, introduced in the Texas House Judiciary and Civil Jurisprudence Committee, would remove the exception in the penal code for criminal homicide that applies to women and medical professionals and allow them to be charged with murder of an unborn child. The measure would be a blanket ban on abortion procedures in the state, allowing the state to enforce the bill “regardless of any contrary federal law, executive order, or court decision.” The landmark 1973 US Supreme Court decision in Roe v Wade affirmed the legality of a woman’s right to have an abortion under the Fourteenth Amendment to the Constitution.

For years, the anti-choice movement would fumble and foozle around if you pressed them on their loose employment of words like “murder” by asking them what should happen to the doctor and/or the woman involved in the procedure. They seem to be losing that convenient ambivalence, at least in Texas.

Texas state Rep. Tony Tinderholt, a Republican who introduced the bill, argued that the legislation does “not specifically target women” nor is he “specifically criminalizing women,” but “equalizing the law so that everyone that is culpable or takes part in what I call murder … can be punished.” The hours-long hearing remained largely civil until the committee heard from its first panel opposed to the bill. “The bill authors know that this legislation is unconstitutional because of federal judicial precedent set by Roe v Wade,” NARAL Pro-Choice legislative intern Jasmine Wang said. “So even giving this bill a hearing is both a waste of time and resources.” Leach took issue with Wang’s testimony and went on to grill Wang on her stances on abortion. He also accused NARAL’s witnesses of “sniggering” and “laughing” during others’ testimonies.

They’re feeling very emboldened these days, probably because of the ongoing stacking of the federal judiciary. “Fetal heartbeat” bills are advancing in eight states, including both Georgia and Ohio. In the latter, the bill is already on the desk of Governor Mike DeWine. From NBC News.

Ohio’s closely divided politics have slowed the progress of the so-called heartbeat bill as it has caught momentum elsewhere, forcing years of debate in the state where the movement originated. Five other states have now passed similar bans, two of which have been blocked by the courts. Republican Ohio Gov. Mike DeWine, who took office in January, has said he will sign the bill, after former GOP Gov. John Kasich vetoed it twice. State Rep. Michele Lepore-Hagan, a Democrat from a storied Youngstown political family, shed tears during the debate, exasperated at a bill she said would harm Ohio and its future.

It’s here where I usually make a wisecrack about how these laws guarantee nothing but expensive and futile lawsuits that the state in question is bound to lose. However, looking at the current Supreme Court, I’m not sure those are very funny any more.

And now, a Very Special Episode of our semi-regular weekly survey. For years, we’ve all been following the shenanigans of ALEC, the all-purpose wingnut legislation mill that provides identical bills for identical causes in different states at the same time. Now, thanks to USA Today and the Arizona Republic, we have a way to track precisely how widespread this underground legislative fungus really is.

A two-year investigation by USA TODAY, The Arizona Republic  and the Center for Public Integrity reveals for the first time the extent to which special interests have infiltrated state legislatures using model legislation. USA TODAY and the Republic found at least 10,000 bills almost entirely copied from model legislation were introduced nationwide in the past eight years, and more than 2,100 of those bills were signed into law.

The investigation examined nearly 1 million bills in all 50 states and Congress using a computer algorithm developed to detect similarities in language. That search – powered by the equivalent of 150 computers that ran nonstop for months – compared known model legislation with bills introduced by lawmakers. The phenomenon of copycat legislation is far larger. In a separate analysis, the Center for Public Integrity identified tens of thousands of bills with identical phrases, then traced the origins of that language in dozens of those bills across the country.

This is an extraordinary exercise in data journalism. I’d start engraving that Enterprise Reporting Pulitzer right now and avoid the last-minute rush. The basic dynamic in all the bills is fraud, with nasty real-world consequences. Read the whole thing.

The Asbestos Transparency Act sounds like the kind of boring, good-government policy voters expect their representatives to hammer out on their behalf to safeguard public health.  Better transparency was one reason Colorado state Sen. Jerry Sonnenberg said he introduced the bill in 2017, and again last year, at the urging of a tort reform group called the Colorado Civil Justice League and backed by insurance companies, including Nationwide Insurance. “Whenever you add transparency to the mix, it helps all consumers,” said Sonnenberg, a Republican.

But the bill had nothing to do with requiring companies to disclose to consumers what products contained asbestos or informing those who had been exposed to the cancer-causing mineral how to get help. It, in effect, cast corporations as victims of litigation filed by people harmed by asbestos. The model bill requires people battling the asbestos-triggered disease mesothelioma to seek money from an asbestos trust, set up to compensate victims, before they can sue a company whose product might have caused their cancer.

Democracy cannot stand for long when it’s this kind of puppet show.

And we conclude, as is our custom, in the great state of Oklahoma, where Blog Official Chuck Wagon Semolina Inspector Friedman of the Plains brings us a better idea than it sounds. From Fox 23 News:

Rather than relying on a traditional landscaping crew, Bixby is using the goats to clear the grass and other vegetation along the banks of the lake. The city installed fencing and cattle guards to keep the goats in a designated area. They also brought in several donkeys to keep a watchful eye on the animals. Officials said the idea for the goats started at a recent City Council meeting.

Once the goats unionize, however, a new plan likely will be prepared. Robot Goats: Threat or Menace?

This is your democracy, America. Cherish it.

West Texas gunman had been…

Why Is the Structural Budget…